The Tarifa Site by Muslims 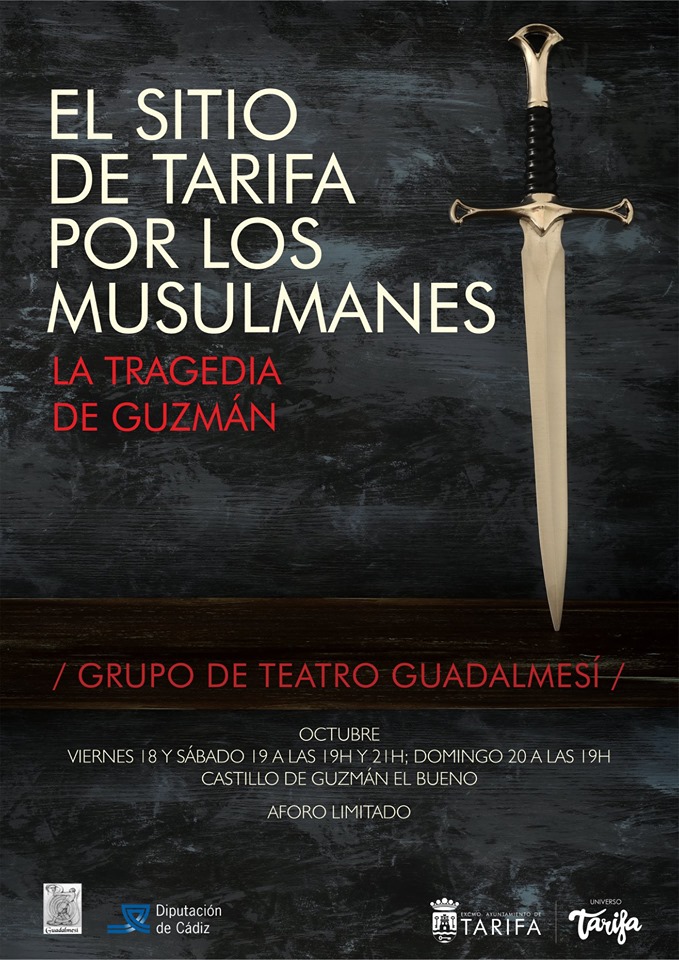 “THE TARIFA SITE FOR THE MUSULMAMES. THE TRAGEDIA DE GUZMÁN”, NEW CULTURAL AUTUMN APPOINTMENT ”
The Guadalmesí theater group today presented the theater promoted by the City Council in collaboration with the Diputación de Cádiz

The “Cultural Fall” agenda continues from next Friday and throughout the weekend with theatricalization of the “Tarifa Site by Muslims. The tragedy of Guzman. ” The cultural group “Guadalmesí” with Milagros Salvatierra at the head of the scenic direction recreates one more year the history of Alonso Pérez de Guzmán and the defense of the Tarifeña square. The show incorporates news. It will start this time at the main entrance of the Castle. Under jaima, a Muslim camp will be recreated and a first children’s play about “The Son of Guzman”. Then the bulk of the “Tragedy of Guzman” will be staged once more on the facade of Santa Maria. The number of functions is increased on the late Friday night and Saturday and noon on Sunday to accommodate the public. This has been said today coinciding with the presentation of the poster the Councilor for Culture and the mayor of Tarragona who appeal to the attractions of next weekend.

The basis of the show is still the operatic text of Antonio Arnao “The drama of Guzman”, adapted for the occasion by the director of the Guadalmesí cultural group, Milagros Salvatierra. But the global stage setup is different.

First because it comes under the generic title of “The Site of Muslims, the Tragedy of Guzman.” And it is that as it was announced last July, the intention of the local City Council is to alternate annually the representations of outstanding episodes of the history of Tarifa. This year, coinciding with the 725th anniversary of the Gesta de Guzmán el Bueno, it is up to the theater group “Guadalmesí” to narrate how the Plaza de Tarifa resisted against the Muslims. This was highlighted by the Councilor for Culture, Francisco Terán, who encouraged participation in a new free cultural event.

Another novelty will be given by the show itself that incorporates a new scene. On the esplanade of the main gate of the Castle a Muslim camp will be theatricalized, with the new premiere of the play “Son of Guzman” starring three small Tarifeños. Starting the bulk of the show will take the public back to the facade of Santa Maria where about 15 performers will give life to the “Tragedy of Guzman”, theatrical adaptation of the play Antonio Arnao.

Milagros Salvatierra returns to the front of the address, which today explained details such as the options that people with reduced mobility will have to be able to move through the two planned scenarios.
The show with free admission and limited capacity increases the number of passes. On Friday, October 18 and Saturday 19 there will be performances at 19:00 and 21:00.

On Sunday, day 20 the performance will be at 19:00. From the City Council of Tarifa, the effort and work of the cultural groups of Tarragona that contribute to boost the cultural agenda stood out. Son said the Mayor, an essential reference.

The Tarifa Site by Muslims. The Tragedy of Guzman is the proposal of the next weekend and has the support of the Diputación de Cádiz.