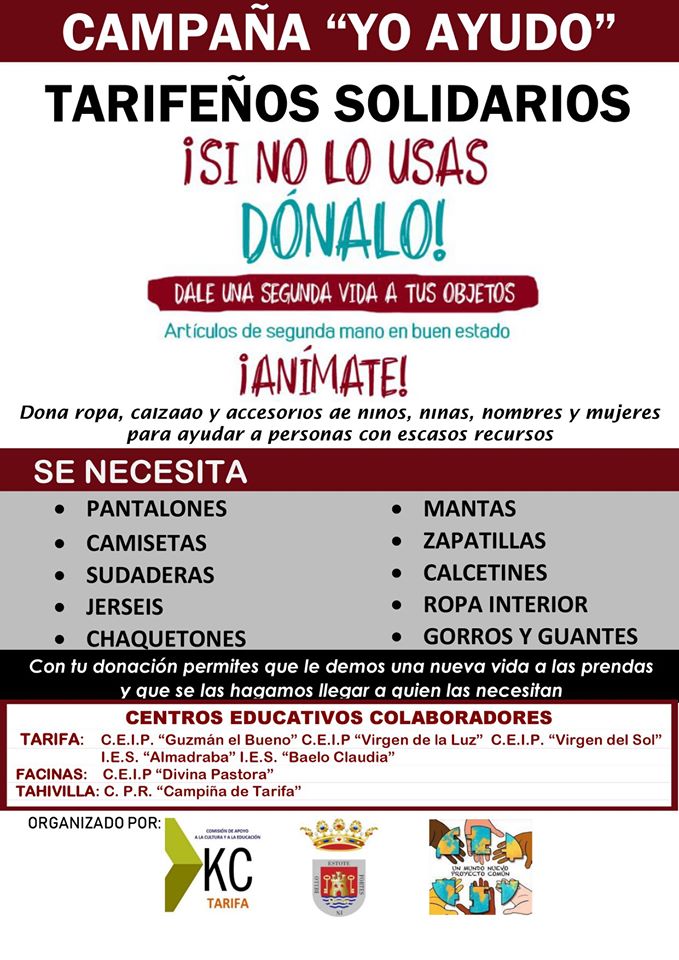 ALL THE EDUCATIONAL COMMUNITY PARTICIPATES IN THE SOLIDARITY CAMPAIGN “I HELP”
The proposal framed in the Municipal Educational Offer is promoted by KCTarifa and the Education area, and will be destined to “Solidarity Tarifeños”

The “I help” campaign of KCTarifa reaches the schools of Infant, Primary and Secondary Education within the municipal educational offer with the impulse of the Education area, and the collective “Tarifeños Solidarios” as beneficiary.

The seven educational centers of Tarifa participate in the “I help” initiative that provides for the collection and classification of clothing, footwear and accessories in educational facilities with the collaboration of the different AMPAs. In this way, efforts are made to join the attention of people in vulnerable situations and favor solidarity recycling. The Tarifeños Solidarios collective will be the recipient of the proposal promoted with the involvement of all the centers.

With a warehouse on the first floor of the former headquarters of the ISM, next to the premises of the Aljaranda collective, “Tarifeños Solidarios” has been addressing the demands of disadvantaged and transient collectives for years. In his “wardrobe-warehouse” the donations of clothes, footwear and accessories are organized, classified and arranged – especially blankets of great value in the current dates – with which they attend the requirements of the whole Region.

Their anonymous and quiet work began years ago through social networks, and the phenomenon of immigration in the Strait recently placed them in the account of the social chronicle. They are still there attending the needs of disadvantaged groups, bystanders and all that initiative that demands their collaboration. We look at them today because the “I Help” campaign of the KCTarifa citizen commission, framed in the municipal educational offer of the Education area, makes them recipients of the appeal launched in tandem, in all the educational centers of the municipality.

Until February 14, in the five Infant and Primary schools of the municipal district and in the two IES, clothes, especially pants, sweatshirts, coats and coats, gloves, hats, scarves and underwear are collected. Also footwear and accessories such as blankets, backpacks, suitcases, belts and bags. They will be sent to the social group to carry out a campaign that seeks to serve people in vulnerable situations and seek solidarity recycling.