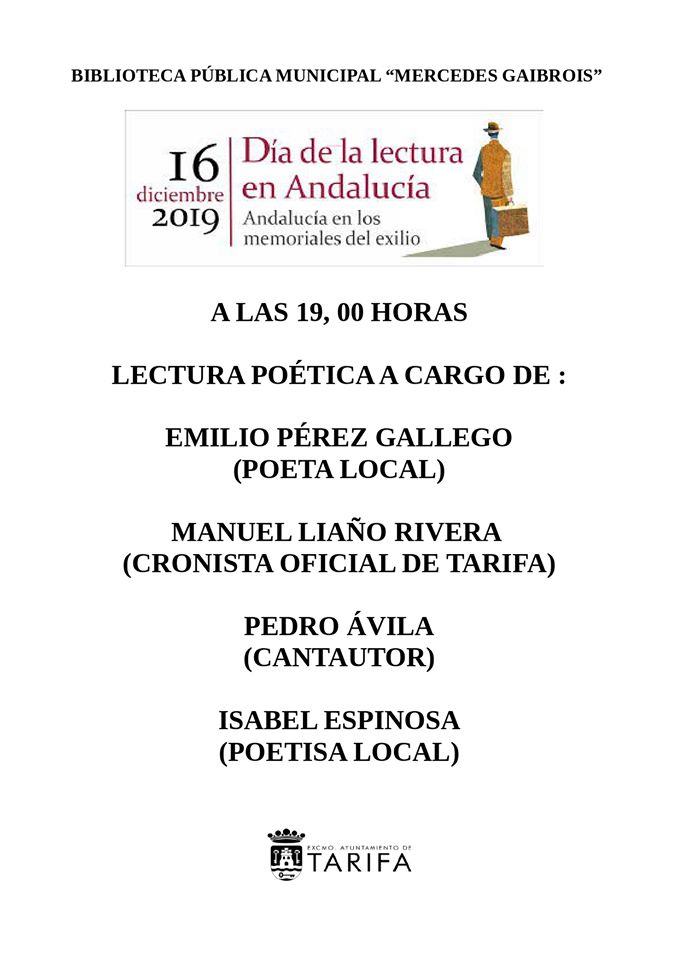 THE LIBRARY CELEBRATES THE DAY OF READING WITH THE POETRY OF AUTHORS AND LOCAL INTERPERSES
Emilio Pérez, Manuel Liaño, Pedro Ávila and Isabel Espinosa will recite their own works and Andalusian authors in a public event organized by Culture

The municipal hall of the library joins the Andalusian celebration of the day of reading. It will be next Monday, December 16 at a public event organized at the Mercedes Gaibrois and promoted by the municipal area of ​​Culture that has brought together local authors and interpreters for the occasion to highlight the importance of reading.

From 19:00 of Monday, the artist and writer, Emilio Pérez Gallego and the spokesman of the Office of the Official Chronicler and also fond of poetry, Manuel Liaño will join recital in a meeting with poetry as a reference of the literary creation.

In addition, the event will also feature the participation of the poet Isabel Espinosa who will read her own creations, and the musical interpretation of the artist based in Tarifa, Pedro Ávila, a representative figure in the 70s of the social and protest song promoted from exile Spanish in Latin America. Pedro Ávila has musicalized in several recordings (“The New Man Singing”, “Living on Borrow”) the work of prominent poets such as Ángel González, Blas de Otero, Rafael Alberti and Miguel Hernández, among others.

From the area of ​​Culture, the municipal delegate Francisco Terán summoned the readers and citizens to participate that extols the reading and poetry in a local key. The act open to the public will be next Monday, December 16, coinciding with the Day of Reading in Andalusia, an event promoted by the Andalusian Center of Letters to address “Andalusia in the memorials of exile.” The Ministry of Culture, through the Centro Andaluz de las Letras, dedicates the year 2019 to the eighty anniversary of the Andalusian exile. Under the motto “Andalusia in the memorials of exile”, the authors Chaves Nogales, María Zambrano, Francisco Ayala, Luis Cernuda, Manuel Andújar, Emilio Prados, Manuel Altolaguirre, Juan Ramón Jiménez and Zenobia Camprubí, Agustín Gómez Arcos or the composer Manuel Falla they will be the protagonists of the central acts of the edition.