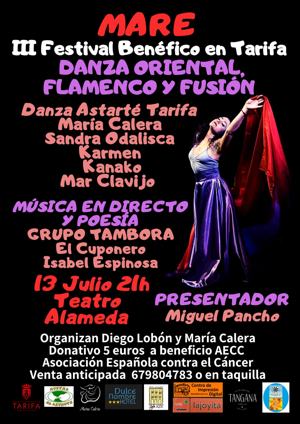 The Festival “Mare” returns as an eclectic bet that encompasses oriental dance, flamenco and fusion of styles. The Tarifean delegation of the Spanish Association Against Cancer and the challenge of oncological research are once again the objective of a recreational event that is consolidated in Tarifa’s summer agenda. Tickets for the price of five euros are already on sale in points such as the House of Culture, the Tourism Office and shops in the town. This morning has been presented at the local council to the poster announcing the third edition scheduled for July 13.

It will be the third edition of a festival to raise funds for the fight against cancer. In the presence of the dancer of oriental dance Maria Calera other attractions that she herself enumerated this morning will be added. On the stage will be the own oriental dance learning group that coordinates Calera under the name of “Danza Astarte Tarifa”, but there will also be flamenco from the hand of the Japanese based in Jerez, Kanako.

Live fusion music will be another of the highlights of the group “Tambora”, and records will be mixed with poetry recital by Isabel Espinosa and the fandango force of Víctor González, seller of the ONCE popularly known as ” The Cuponero “.

There are other collaborations such as Mar Clavijo, Karmen and Sandra Odalisca, specialists in oriental dance, and the presentation of Miguel Pancho.

The local delegation of the Spanish Association against Cancer is the recipient of this charity festival. The points of advance sale of the tickets have already been coordinated at the modest price of 5 euros. They are in the Casa de la Cultura, the Tourist Office, the central tobacco shop of Pablo Manso, Muebles Domínguez or “Las 4 Esquinas” bar. Also on the phone 679 80 47 83, it is possible to reserve tickets for the appointment of July 13. From the organization it is remembered that the row “0” exists. That is, those who wish to collaborate without attending the theater can do so with the acquisition of a virtual line that does not subtract entrances to the stalls.

From the City Council of Tarifa that saw this Festival born, its growth and diversification stood out with the expansion of attractions. The MARE festival is inserted in the summer agenda as a playful and solidary option. The appointment will be on July 13, Saturday, from nine in the evening, at the Alameda theater.