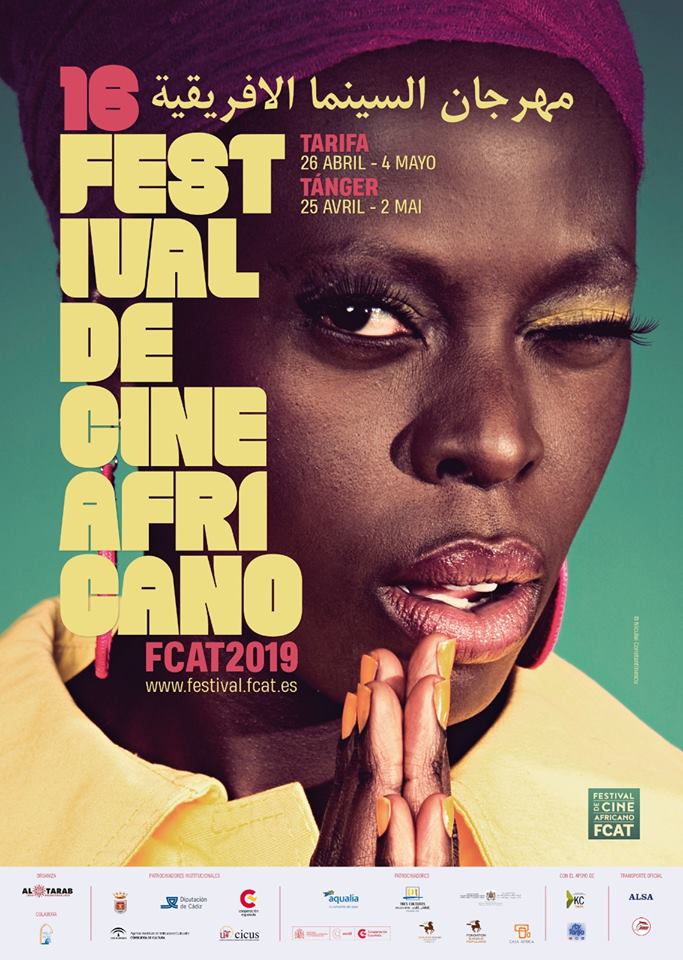 THE 2019 AFRICAN CINEMA FESTIVAL WILL MAKE A WIN TO THE AMERICAN CONTINENT.
The Ugandan singer Jaqee stars in the poster of the 16th African Film Festival of Tarifa-Tangier (FCAT) to be held between April 26 and May 4.

The African Cinema Festival of Tarifa-Tangier (FCAT) celebrates its 16th anniversary in its 2019 edition, making known the cinematographies of the African continent and becoming a reference for African theaters in the Spanish-speaking world. The wink of the Ugandan singer Jaqee puts a funky touch to the image of this edition of the FCAT, a festival that will grow on its African side, with sub-venues in Chaouen and Tetuán, as well as on the peninsular shore with activities at various points in the Campo de Gibraltar, in order to continue forging diversity and cultural dialogue between the two continents.

Between April 26 and May 4 in Tarifa, and from April 25 to May 2 in Tangier and its Moroccan extensions, the FCAT will also focus this year on the American continent. From this edition, La Tercera Raíz section will host the Latin American production directed by Afro-descendants, with the presence of black actors or Afro-themed actors. The cinema of Colombia, Mexico and the Dominican Republic will take center stage this year due to the relevance of the cinematographic production of these countries and their high percentage of afro-descendant population.

This look is broad for the director of the festival, Mane Cisneros, since this year the FCAT, “will look from the Straits of Gibraltar not only to its two shores but to the other side of the ocean where 200 million Afro-descendants of Spanish language already rise his voice through cinema claiming his place on the big screen. ”

For its part, the competition section Hyperopia will offer in its fourteen films parity between directors and directors, seven and seven, as well as there will be parity between the number of documentaries and fiction films in competition. Longs from South Africa, Tunisia, Burkina Faso, Sudan, Libya, Morocco, Ethiopia, Mozambique, Lesotho and Egypt will compete in farsightedness offering a diverse mosaic of current African cinematographies. The programming of the different sections of the festival will be known next March 29.

Issues such as diasporas, black resistance, human rights and immigration, as well as identity and black feminisms will sail throughout the festival between its programming and parallel activities, inviting reflection and debate. Among the activities that accompany this edition of the FCAT is the course Pioneers and revolutionaries of African cinema that will be given by the film critic and programmer Javier H. Estrada, whose registration period remains open.

For four days this training will deepen into authors who changed the future of cinema in the continent, establishing connections with the talents of our era and covering an extensive territorial framework: from Morocco to Rwanda, passing through Ethiopia, Mali, Senegal or Tunisia. The look of filmmakers like Djibril Diop Mambéty, Sarah Maldoror, Souleymane Cissé or Ahmed Bouanani will focus this course that will take place between the 27th and the 30th of April.

Finishing with the image of this edition of the FCAT, the singer Jaqee (Kampala, Uganda, 1977), protagonist of the poster and cosmopolitan woman who emigrated with 13 years to Gothenburg, Sweden, and who now resides in Berlin, has a reggae voice with mysterious blues tones. This is how he began to show it on his debut album, Blaqalixious (2005), where he boldly mixed blues and soul. Five albums later, including a tribute to Billie Holiday with the Bouslän Big Band, Jaqee recently published Fly High, inspired by his own life. A work that lives up to its title thanks to a voice that manages to travel to bigger places.