Patroness Saint to Tarifa, the Virgin of the Light, is the Virgin Mary dedication which has been venerated since XVI century in the Caheruelas Meadow hermitage, situated some 8 kilometres Northwest of the city in the midst of the Natural Cork Oak Park and close to the place where the Salado Battle was fought. Legend tells that she would have intervened by prolonging daylight so that Christian troops could ultimately end victorious.

Construction dates back to XVI century, but it was ravaged by Napoleonic troops and thereafter rebuilt in the same XIX century. Patron Saints to Tarifa were also Saint Hiscio, Carteia’s bishop (the city was erroneously placed here) and Saint Matthew, whose festivity falls on the day of the Castilian conquest, September 21st.

From 1914 and coinciding with the first Sunday of September, the traditional agricultural parade is held –it is declared to be of Touristic Interest in Andalucía- and participants in the hundreds walk the Virgin to the city, thereby inaugurating the Royal Fair and Festivities. A religious pilgrimage is organized on the day she returns to the hermitage.

Restaurant next to the Sanctuary of the Virgin of Nuestra Señora de la Luz in Tarifa.

Molino El Mastral is a 4-minute drive from Tarifa Beach, in the Alcornocales Natural Park. It offers an outdoor pool and rustic-style apartments with a TV and a private bathroom. The Molino apartments feature terracotta floors and rustic décor. Each… 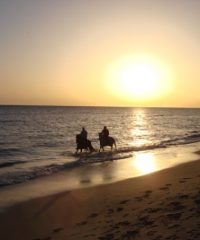 In El Molino Mastral you will enjoy nature in its purest form. The mill is located in the natural park of Los Alcornocales and only 600 meters from the beaches of Tarifa. In this idyllic setting you can go horseback riding, practice the sport of…