The Algarbes Necropolis is one of the most important archaeological ensembles of the province of Cádiz dating back to the Bronze Age (end of III century B.C.).

It has eight artificial caves in the shape of a circular chamber with entryways on different levels and two of them, nearly identical in symmetrical disposition, flank an ample corridor carved in sandstone. The latter correspond, due to the structure, to a big threshold related to megalithic burial grounds under a covered gallery.

The ten burial tombs may be divided in two groups. Those with a vertical entry, in the fashion of wells or grain storage silos, belong to the first group; and to the second, the vaulted ones with a side access may be adscribed. The archaeological site also houses a tomb that wholly differs from the former. It is an anthropomorphic tomb possibly assigned to a children burial.

The necropolis has been excavated in its totality by Carlos Posac Mon during the years 1967 to 1972 and the findings are of great value. Among these were found lots of ceramic urns. Pieces of bronze, ebony and gold have also been documented, as well as stone utensils, carved or polished, and ornamental objects such as pendants and perforated discs made from sea shells. Several lived in caves are found in the proximity and those were inhabited until 1930 approximately. An Islamic necropolis is also nearby.

Visits are arranged via Arqueoroutes:

For more information, please liaise with the Provincial Culture Delegation of the Andalucía Government.

We are among the Estrecho Natural Park and the Natural Park of the Acorns, in a unique location situated 400m from the famous beach of Valdevaqueros and Punta Paloma. Regarding our town, Tarifa, besides being point of attachment of the Mediterranean…

Since our inception we have been faithful to the care and enjoyment of nature and the environment and under this premise we have strived to create enormously under the rural areas, a sport and educational experience that is unforgettable . In our… 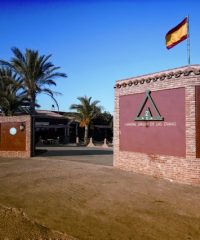 The dunes Garden Camping offers you great tranquility and fun when choosing a holiday. Tarifa is currently the seaside resort visited by all of us and to the many kilometers of white sandy beach and crystal clear water. Tarifa is the cradle of… 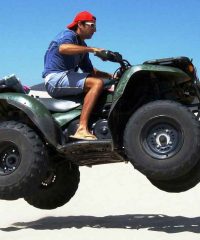 If you are one of those who stays on the beach watching people navigate, do not think about it anymore, call us and leave everything in our hands. In a few days you will be part of the show. Kitesurf school: Baptism courses, initiation, improvement…

In the Cortijo Las Piñas we have all the amenities so that the visitor does not need anything during their stay with us in Tarifa: Cafeteria, cozy lounge with two rooms, one with fireplace to relax and another with TV. Terrace with stunning views of…